LinkExchange SearchMe WhatWeDo AboutUs Sitemap Next page Analyse your investment before committing yourself.

Urocystis Cepulae and everything you need to know to detect, avoid and cure this plague.

1. Common name and scientific name, Pictures under green tabs at the left.

This pathogen is widespread in Europe, western Asia, Canada and the USA, and is also known from Australia, Chile, Egypt, India, Japan, Korea Republic, Mexico, Morocco, Peru, Philippines and Thailand.

Onion smut is caused by the soil-borne fungus Urocystis cepulae and infects the flag leaf (cotyledon) as it grows through the soil. This is the most common, maybe only infection stage. Often the seedling survives this initial infection and the characteristic black streaks and blisters appear in the leaves and small bulbs later in the growing season as the fungus moves from the infected flag leaf to younger leaves. Some seedlings will be killed by the disease.

A cool (13-22oC) and wet spring increases the incidence of smut infection, because the onion seedlings grow slowly and the flag leaf is in the soil for a longer period. Similarly, planting onion seeds too deep will also make them more likely to be infected. Smut spores (teliospores) survive in the soil for about 15-20 years, and even long crop rotations may not reduce disease incidence very effectively. Seed treatments with fungicides can reduce losses to the disease and growing onions from onions sets avoids the disease. The disease is spread when contaminated soil or set onions are transferred to smut-free areas.

4. Parts to be damaged

First symptoms are observed at the cotyledonary stage as dark, thickened areas which break open during further leaf development, showing characteristic dark spore masses. Plants may be killed in 3-5 weeks. Surviving plants show short, distorted leaves bearing lesions throughout their length. Bulb development is poor. The spores are spread by wind, rainfall, soil particles and plant residues. There is no seed transmission, but spore balls could ocuur as contaminants of onion seeds samples. The optimum infection temperature is 13-22?C.

The soil born pathogenic fungus infect very young onion plants in the flag leaf stadium, during wet and cold weather conditions. Infecting hyphae penetrate the leaf epidermis and enter the mesophyll where they keep pace with the growth of the cotyledon leaf. The sori are produced in these tissues. If the fungus penetrates the meristematic tissue at the base of the cotyledon leaf, then the leaves may also become infected. Damage period occurs mainly in the months april and may, but can continued during the growing season. The spores are mainly found on the outer scales of the onions.

Fusarium oxysporum or Sclerotium cepivorum are more common and have a larger economic impact.

U cepulae can be monitored in the field. Specific symptoms are black elongated blisters on cotyledons and young leaves. These blisters contain the characteristic black fruiting bodies (chlamydospores) of the fungus.

D. antiqua can be monitored and controlled through the use of colorful sticky traps or buckets of soapy water that attract maggots and trap them. Pheromone traps have also been successful in controlling maggots. These are also effective in catching adult flies, limiting future generations of maggots.

There are no effective chemical treatments to control or prevent U. cepulae infection during the growing season.

Clean seed, crop rotation, monitoring and removal of infected plants are the control methods which are available.

Next up: Analyse your investment before committing yourself.

Pictures of this plague: 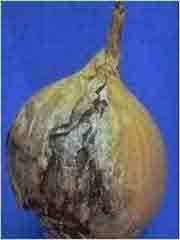