Ditylenchus Dipsaci and everything you need to know to detect, avoid and cure this plague.

1. Common name and scientific name, Pictures under green tabs at the left.

D. dispaci occurs in most temperate areas of the world (Europe, Mediterranean region, North and South America, Northern and Southern Africa, Asia and Oceania), but it does not seem able to establish itself in tropical regions except at higher altitudes that have a temperate climate.

D. dipsaci is a slender transparent worm. Adults is about 1,0 - 1,3mm long with a moderately developed head skeleton and a very short stilet of about 10-12?m long with distinct basal knobs. Lateral fields with four incisures and a tail which terminus is sharply pointed. The post-vulval sac extending about half-way to the anus.

D. dipsaci is a migratory endoparasite that feeds upon parenchymatous tissue in stems and bulbs, causing breakdown of the middle lamellae of cell walls. Therefore infected plants often causes swellings and distortion of areal plant parts (stem, leaves and flowers) an necrosing or rotting of stem bases and bulbs. The stem of onions is the very small part between roots and bulb and is only a few millimeters long.

In onion plants at 15oC, the life-cycle takes about 20 days. Females lay between 200-500 eggs each. Fourth-stage juveniles tend to aggregate on or just below the surface of heavily infested tissue to form clumps of "eelworm wool" and can survive in a dry condition for several years. They may also become attached to the seeds of host plants. In clay soils, D. dipsaci may persistent for many years. Cool moist conditions flavour invasion of young plant tissue by this nematode.

4. Parts to be damaged

In general, this nematode causes swellings and distortion of aerial plant parts and necrosis or rotting of stem bases and bulbs. Penetration of onion leaves by D. dipsaci causes leaf deformation and leaf swellings or blister-like areas on the surface. The leaves grow in a disorderly fashion, often hang as if wilted and become chlorotic. Young plants can be killed by high infestations. The inner scales of the bulb are usually more severely attacked than the out scales. As the season advances the bulbs become soft and when cut open show browning of the scales in concentric circles. Infected bulbs spread a penetrating odor, which inform the presence of the nematode (during storage) immediately.

The nematode infect young onion plants in the field, during the early spring. During the growing season nematode populations increase rapidly by temperatures between 15 - 200C. D. dipsaci can also invade shoots by entering the host trough the stomata. Infestations are favored by wet and mild temperatures and adversely affected by dry conditions and temperatures below 10oC and above 22oC. In temperate regions, nematode density and damage increase in fall and diminish drastically in winter. High nematode density (> 1 nematode/cc soil) can cause complete disruption of young onion plants.

D. dipsaci is one of the most devastating plant parasitic nematodes, especially in temperate regions. Without control, it can cause complete failure of host crops. Infected soils cannot be used for onion cultivation for decades.

Soil analysis is a strong method to know if the soil is infected by D. dipsaci. Onion seed is tested six times on D. dipsaci contamination by seeds companies, before the seeds are packed and used for sowing. Each seed pack have an unique lot number, by which the seeds can traced directly to the cultivation fields forward and backward.

During the growing season periodically monitoring of the onion crop is necessary, especially during favored developing conditions for the nematode in the spring. Patches with stunted and sparse plants in an onion field can be a signal that the soil is infected by nematodes.

Spreading and development of the nematode occurs mainly by infected soil of production fields. Therefore optimal hygiene of farmer equipment is a strong method to prevent further spreading of D. dipsaci between fields. The nematode itself spread very slowly. When a field infection is observed further spreading of the population can be restricted by removing all onion plants within the infected patch and a few meters around it. A good weed control is also necessary, because D. dipsaci have a broad range of host plants, including weeds. As described above, when a infection of D. dipsaci is monitored, no onions should be cultivated on that plot anymore.

Chemical treatments of the soil are not an economic proposition for large areas, because they are expensive and are pose environmental and human risk.

Pictures of this plague: 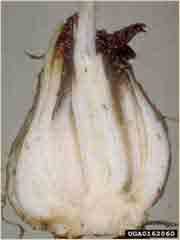