The task was to construct a modern and efficient system. The fact that production takes place on the island of Samsø presented a challenge, since the goods must be ferried to the mainland at 16.00 every single day. This challenge called for a grading system that was capable of running continuously, as any stoppages would result in considerable costs for Brdr. Kjeldahl.

Therefore, a customised solution was developed, based on standard SKALS specifications. The system consists of an inclined conveyor belt, which transfers the potatoes to either a brushing machine or a soil extractor. The destination depends on how thick the potato skins are. Once the potatoes have been cleaned, they go to two modular grading machines, which can grade them into five different sizes. For Brdr. Kjeldahl, it is vital that the potatoes can be transferred directly into the silo, the boxes or onto the washing line via cross-belt separators.

Additionally, a platform has been built around the system. A riddle rack is placed on the platform, making it quick and easy to replace the riddles in the grading machines and to service the system. 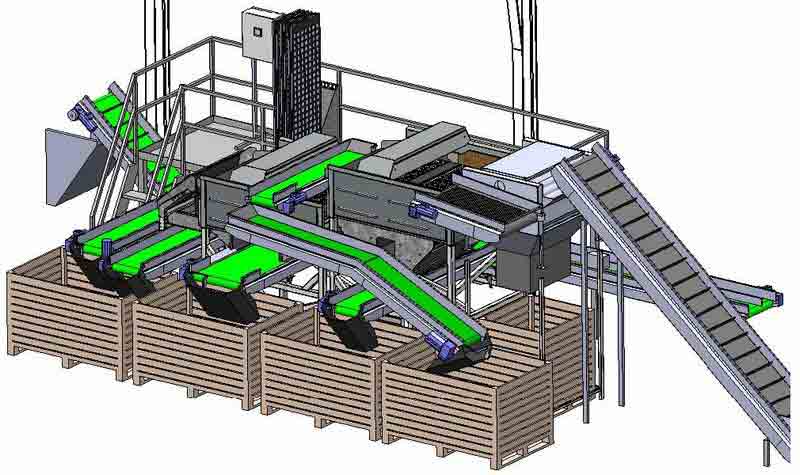 CUSTOMISED SOLUTIONS, 3D drawing of the system for Brdr. Kjeldahl

All potatoes are sold to the retail company Dansk Supermarked.

The great advantage of the new system is that its capacity is an impressive 50% higher than the previous system.

The new system has been running continuously since it was installed and has not experienced any problems. An additional benefit is that noise in the production facility has been significantly reduced, something which is greatly appreciated by the employees. 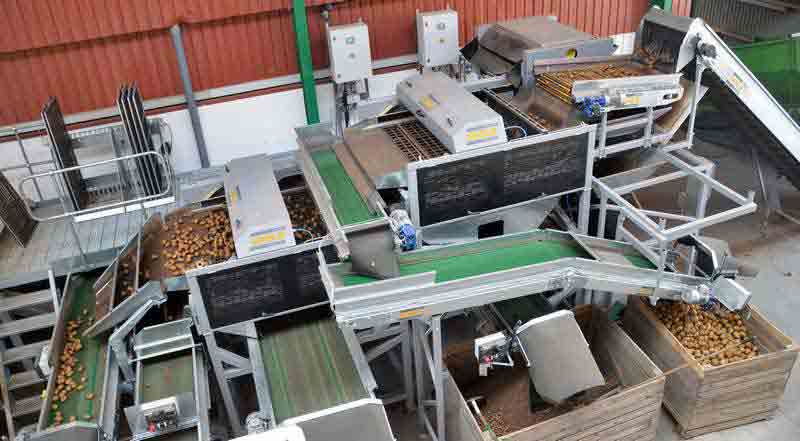 The three-dimensional layout of the potato grading line for the Brdr. Kjeldahl Company in Samsø, Denmark.

All potatoes are sold to the retail company Dansk Supermarked.

The new SKALS potato grading line in action at the Kjeldahl Company in Samsø, Denmark

For Brdr. Kjeldhahl, it was very important to find a high-quality system, that guaranteed system support and the quick and efficient delivery of spare parts. The SKALS solution was therefore an easy choice.

The company Brdr. Kjeldahl is extremely pleased with the entire process and their expectations have been fully met. They benefitted from a fluid dialogue with both the SKALS sales contact and the service team at all stages of the process. The phase leading up to and following delivery was seamless, and corrections have been made as agreed. Søren Peter Kjeldahl said:

"We are delighted with the level of service we have received from SKALS. Throughout the process, the SKALS sales consultant was highly professional, providing us with new ideas and faultless guidance. We are in no doubt whatsoever that we have chosen the right grading system for us. The system has been running perfectly since it was installed." 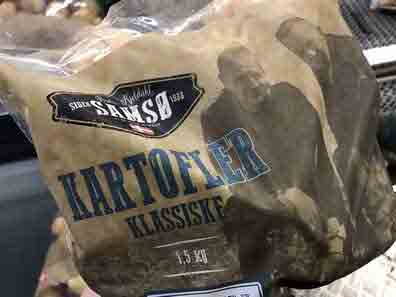 The island of Samsø is well known throughout Denmark for its early potatoes. This is due to the fact that the island enjoys a mild climate with fewer rainy days and more hours of sunshine than anywhere else in the country. The weather conditions and the good sandy soil on the island create optimal conditions for the growth of potatoes. Brdr. Kjeldahl begin the potato growing process in January, when they germinate the potatoes in heated warehouses. When the risk of frost is minimal, the potatoes are placed in the soil. From there on, the wind and weather determine when the potatoes can be harvested. In addition, the island Samsø is marketed as the breadbasket of Denmark. Over the last few years, there has been increasingly high demand for produce from the island. Samsø has built up a strong brand, and is attracting interest from several supermarket chains. 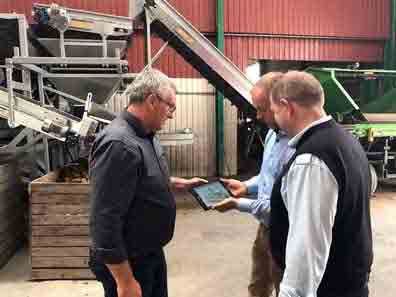 Brdr. Kjeldahl are very satisfied with the advice and service they have received from SKALS.
Søren Peter Kjeldahl go through the grading system with Bøje Olsen and Søren Lund Madsen from Skals. 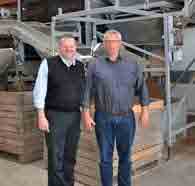 Reversible cross belts, which can transfer the produce into boxes, or to the washing line on the opposite side, or the silo

FDS box fall breakers - automatically open and close using compressed air. To be activated with a remote control from a truck

Brdr. Kjeldahl's potatoes are subject to strict quality requirements in order to ensure that the consumer always receives the best potatoes possible.

Next up: Weighing onions and potatoes.

The company is located on the 114 sq km Danish island of Samsø in the Kattegat. Brdr. Kjeldahl has been growing and delivering high quality potatoes since 1988. They sell all of their potatoes to the retail company Dansk Supermarked.

In addition to the 6,000 tonnes of potatoes produced each year, the company also grows asparagus, pumpkins, red cabbage, celery and onions across 750 hectares of land. After decades of use, their previous grading system was both outdated and in need of replacement, meaning it was the ideal time to update their system and move into line with 21st century standards.